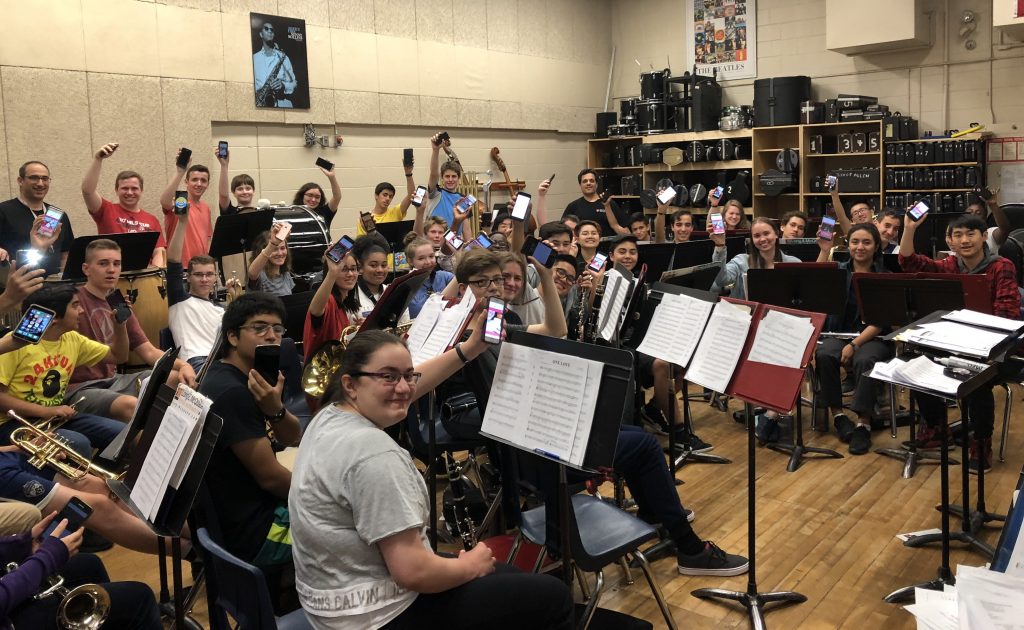 When Davide Garofalo took on the role of Arts & Technology Head and Band Director at Bishop Allen Academy, little did he know that he was about to set a ripple effect into motion, effecting change at the school and across a community.

Located in Toronto’s west end, the high school is part of the Toronto Catholic District School Board and is home to over 1,600 students. At the time, Davide only knew he wanted to bring in Breezin’ Thru to formalize the music theory component for all music classes for grades 9 to 12. His goal was to make a change – one of the challenges he wanted to take on was to further develop the music program and support the department as a whole.

“At this school, and my former school, the kids weren’t really responding to a pencil and paper approach,” stated Davide. He was drawn to Breezin’ Thru Theory because of the effective scaffolded lessons.

“I also really liked that it was online and saves more class time for performance.” He goes on to say that even if a school doesn’t have one-to-one technology “it doesn’t need to be a barrier anymore; many if not most students in our community have a phone! With Breezin’ Thru The students took to it immediately, unlike other programs.”

He explains that he often needs to change the students’ perceptions.

A lot of kids are apprehensive about music theory. It’s heartbreaking to see some students enter the ninth grade after two years of studying music with very little or no music literacy skills, and come in with the mindset that they can’t do theory or learn to read music.

Breezin’ Thru is one of the tools that helps them breakdown that misconception. It makes learning music theory fun and accessible, so they are more receptive. It’s a win-win situation,” said Davide. “Breezin’ Thru allows kids to work at their own pace, and gives them instant feedback on how they are doing. It acts as immediate affirmation that they are on the right track.”

And, he’s using it in a very innovative way, in a “flipped classroom” context. This is an instructional strategy where the students are assigned the lessons beforehand, go through it themselves at home and then discuss and engage with the music theory concepts in class the next day. It allows Davide to be a better mentor, acting as a guide and resource.

Since Breezin’ Thru Theory was introduced two years ago, Bishop Allen students have been working hard, doubling the number of drills completed between this year and last year. Bishop Allen Academy has risen to the top of the Drill-ceptional leaderboard for the Canadian region. Davide says all the BA music teachers can also draw a direct line between the students who have completed the interactive drills to the students with the best marks in their written tests.

It’s also having a direct impact on rehearsals, with many “a-ha” moments.

“What happens is that we will look at a piece of music, and if the kids are trying to figure out some difficult runs, I can ask them what they see. For example, when they look, they now understand that the sixteenth notes are actually the G major scale, starting on the fifth and ending on the fifth,” he said. “It’s a way to look at music through a theoretical lens—but it’s not just on paper, we can bring it to life. The relationship between the music and the theory becomes clear. And, when that clicks, kids are even more motivated to work ahead and do a few extra chapters!”

Davide has not only changed how his own students think about music theory. As a champion of music literacy and Breezin’ Thru, Davide has had an impact on many of the schools and students throughout the school district.

When you build a music program, you want it to be of value not only to the kids but to the community as a whole. Music is a part of our culture and part of who we are as people.

He has spread the word, speaking to his colleagues. “Most administrators, principals and teachers I’ve spoken with are very supportive, especially when you can show results,” Davide confirms. “I advocated for Breezin’ Thru because it works and it makes everything so much easier. Music theory hasn’t changed in hundreds of years, but how we teach it has to, which is what Breezin’ Thru has done. And the program doesn’t cost a lot, so either you spend the money on paper and photocopies, or on this great, online solution. It’s a no-brainer.”

He then went an extra step and spoke to the district’s music and arts resource person, Vicki McRae, to champion the music theory solution. Vicki recognized the value of Breezin’ Thru and offered to fund some school pilots the first year. Based on that success, she then helped roll out Breezin’ Thru to more schools through an innovative co-funding strategy.

The ripple effect has been tremendous. The district pays for part of the cost and the school pays for the rest, so district dollars can go further, ownership stays with teachers, and more students benefit.

So, what’s next for Davide? “I’m looking forward to introducing the students to the composing part of Breezin’ Thru now. There are a lot of kids who are ready for it!”